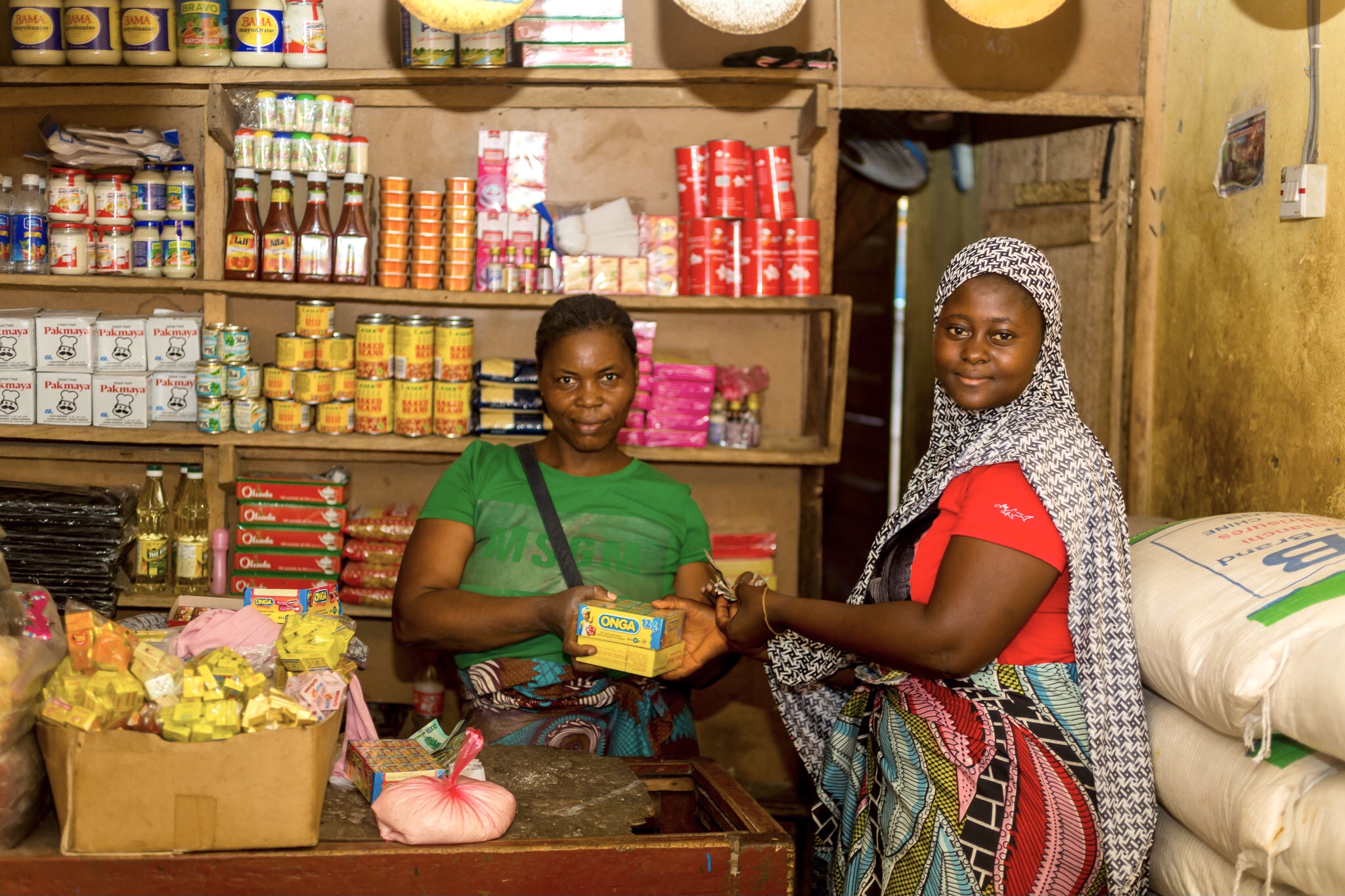 Taking a gender lens to LMDF

The importance of supporting women

Since 2009, LMDF has worked with over 450,000 microentrepreneurs of whom approximately 317,000 are female. The reason for this focus is simple: across the globe women have remained disproportionately excluded from financial services.

There is a persistent gender gap in account ownership, with only 65% of women having accounts at financial institutions versus 72% men.1 This gap is wider in developing economies, and the gap has actually widened in Sub-Saharan Africa over the past decade.2 The challenges faced by women have been accentuated by the COVID crisis, with women being disproportionately represented in informal employment in developing countries and female dominated industries suffering particularly during the pandemic.3 During the COVID crisis, women have been more susceptible to layoffs and job cuts, and have also had limited alternatives for generating income.4

The challenges women perceive are highlighted by 60 Decibels data, which show that women across the globe have higher levels of concern related to COVID than men. Women have been more concerned about the burden of repayment, with 24% viewing it as worse since the pandemic compared with 13% men. The vulnerability of women compared with men has even been reflected in food consumption with 7% more women noting decreases in food consumption during the pandemic than men.

Given this vulnerability, supporting women in the aftermath of the pandemic is particularly important. Financing women has always been renowned for its significant ripple effects it can have on families and communities. When women work, they invest 90% of their income back into their families, compared with 35% for men.5 The investments that women make in food, healthcare, home improvement and schooling for themselves and their children are notable.6 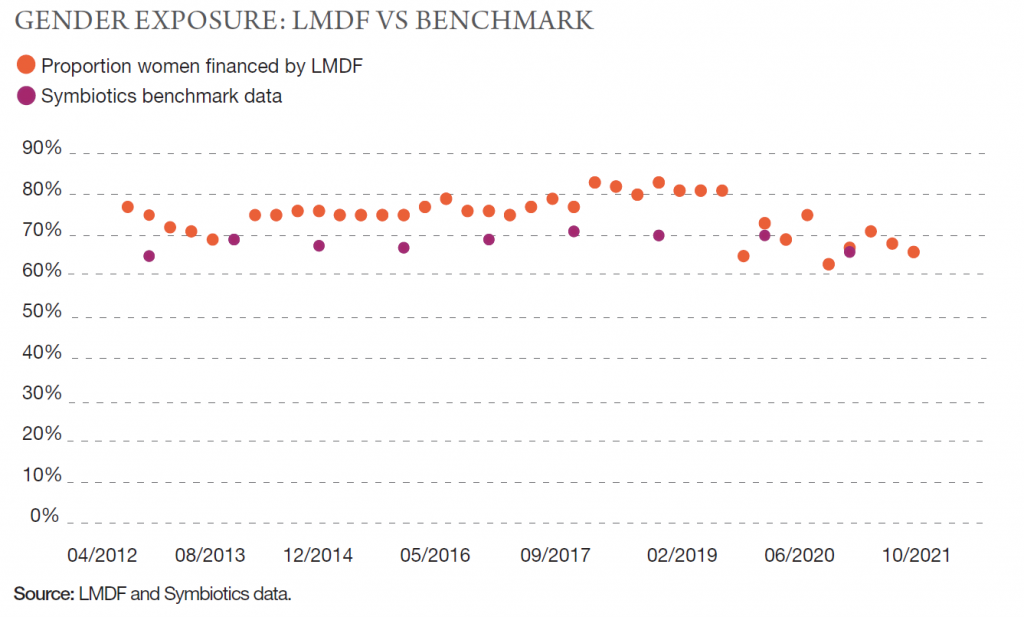 Despite this focus and the need to support women, the proportion of the portfolio invested in female entrepreneurs has been declining. It peaked at 82% in 2018, but has declined from 72% at the beginning of the COVID crisis in 2020 to 65% today.

The Fund has analysed why these changes have occurred and has found that there are several contributing factors:

It is promising to note that the average proportion of women supported by institutions has remained relatively stable. The difference only appears to stem from larger female focused institutions leaving the portfolio. However outreach should not be the only way to consider the gender exposure of a portfolio. The Fund looks to work with institutions that have integrated a gender lens throughout their operations. 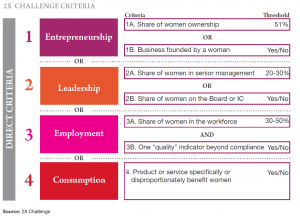 This has led us to consider what measures institutions take to ensure that women are supported. We have examined our portfolio under a gender lens. The 2X challenge, a global initiative to encourage the mobilisation of capital to support opportunities for women in developing countries, recommends using four criteria to examine companies (or in the case of the Fund, its portfolio companies). If any one of these criteria is met, than an investment may be classed as 2X eligible.

Entrepreneurship is the most challenging area to analyse. In many instances, there are indirect shareholdings which makes it difficult to calculate the share of female ownership. In other instances, the shareholding or membership may be so diverse and change so frequently that it makes limited sense. Data is also limited on the number of business which were founded by women. This means the score on this area is relatively low, with just 16% fulfilling this category, although this may well be an underestimate due to lack of data.

Leadership is a much more promising area for the Fund. 71% of institutions were able to comply with either the share of women in senior management or board requirements. On average, 27% of Boards were composed of women and 30% of senior management teams. However, the proportion of female CEOs remains very limited, constituting just 14% of the portfolio. In fact, the portfolio contains more MFIs with an entirely male Board of Directors than it does institutions with a female CEO. Interestingly, all but one of the institutions which is led by a woman are based in Asia.

Employment could not be fully evaluated because no quality indicators are adopted in the Fund’s due diligence process. Nonetheless, over half of the institutions employ more than 40% female staff and on average female staff constitute 44% of employees. It would, however, be very helpful to gather further data which allows the Fund to examine the quality of employment provided and to assess measures which are taken to ensure equality in the work place.

In terms of consumption, although only 14% of portfolio MFIs explicitly state that they have a female focused vision and mission, 67% of institutions provide products which disproportionately benefit women.

It is promising to see that all the institutions in the LMDF portfolio have adopted some form of gender lens. It is even more promising to note that over two thirds fit with more than one of the 2X criteria.

In a recent visit to the Maison de la Microfinance, Franz Fayot, Minister of the Economy noted that “Giving people microcredit is a very strong instrument of empowerment… It can change the lives of people bottom up.” The steps that institutions take to ensure that they have a gendered approach are supporting this empowerment.

Next theme: Microfinance and Education